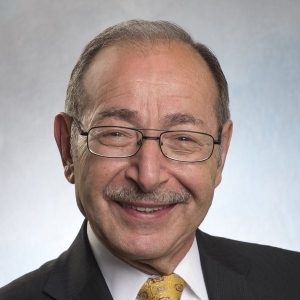 Ossama Al-Mefty was born in Damascus, Syria on April 20, 1947. He completed his medical school at the Damascus University Medical School in 1972 with scholarship awards. His neurosurgical training was completed in 1978 at West Virginia University Medical Center. Following his residency, he was in private practice for four years in Richmond, Virginia. He then moved to Saudi Arabia where he was a staff neurosurgeon and Acting Chairman of the Neurosciences Department of the King Faisal Specialist Hospital in Riyadh. He returned to the United States and academic neurosurgery at the University of Mississippi Medical Center where he advanced to Professor of Neurosurgery, and following that at Loyola University Medical Center in Chicago. He was the Chairman of Neurosurgery at the University of Arkansas from 1993- 2009. Professor Dr. Al-Mefty is currently the Director of the Skull Base Surgery Program at Brigham and Women’s Hospital, Harvard Medical School in Boston, MA.

Dr. Al-Mefty’s area of interest and expertise is skull base surgery, pioneering, and contributing to this field through numerous publications. His scientific contributions are reflected in over 500 publications that include authoring or editing nine books and over 236 peer reviewed journal articles. He is a sought after lecturer and has made over 1,000 presentations and over 90 Visiting Professorships in national and international universities. He is a dedicated teacher and has been a faculty member and director of over 50 workshops and hands- on courses.

Dr. Al-Mefty is a member of several surgical societies and has served in various leadership roles including as a founding member and past president of the World Academy of Neurological Surgeons and North American Skull Base Society. Dr. Al-Mefty serves on several editorial boards of medical journals. He has been honored by several prestigious lectureships including the First Sugita Memorial Lecturer and the Penfield Lecturer and presented with honorary memberships in skull base and neurosurgical societies abroad. He was recently awarded the Olivercrona Medalist and Magnus Medalist for recognition of his outstanding contributions to the neurosurgical field, the Cushing Metal for excellence and innovation, and the Medal of Honor of the World Federation of Neurological Surgeons.

Dr. Al-Mefty is married to Janice Al-Mefty and they have three children: Kynda, Kaith, and Rami.